I could write for days and days on this theme… and I know that Terna & I will revisit this many more times.

I thought long and hard about what I would do for me on my 30th birthday. I didn’t/don’t feel like turning 30 is scary, in fact, I’ve been excited to join the club for a long while… but I was still unsure about what it was that I could do that would mark a new year. I decided I would do what I had been toying with for a while and being strongly encouraged/urged to do for even longer by my mother: I would begin the process of growing out my short hair.

In order to make it as painless and least awkward possible, I decided I would submit to extensions. And so, I had extensions put in to take my short, pixie-ish cut to a chin-length bob.

Deciding to do it was a huge step and statement about my identity – as a woman, as a feminist, as a queer feminist woman. I felt like I was masking a part of my recently lived-in identity. I literally felt like I was making a small part of the way I express my queerness invisible. Diluting a part of me? Succumbing to traditional standards of femininity?

Yes, queerness is not in my hair or my clothing; it’s not in the stereotypes and generalizations… and yet, yes in some ways I have made it about my hair because I’ve chosen it as one of my conduits to make a ‘statement’ about my identity politics.

I cannot deny though the guidance and awareness of those puppet strings I’ve been able to move through this world. Successfully and ironically been guided me in the most familiar ways. When even in the most unfamiliar moments, places and out of my comfort zone, I knew how to play the game, make things work, get through a moment because I knew what was expected of me and how to manipulate…

My motivations to cut my hair were out of curiosity and honestly? Honestly? I think I had a desire to have a ‘queer’ experience like some of the people in my life. To be able to access, fit in and participate in queer identity like they did. They had access to those spaces not just because most everyone else there matched their gender expression – they matched one another’s race and class – one another’s whiteness. They were all teetering on fighting heteronormativity with their white privilege that I hoped I could access too. But what it did was make feel enclosed rather than liberated because it didn’t really give me access to spaces.

Some of my short haired friends say they like their hair short because it’s easier/faster for them to do. This is absolutely NOT my truth. I take a long time to do my hair: wash, dry, straighten, product, scrutinize… and then match with make-up and outfit. Nothing about my appearance is a time freeing activity. I LABOR over it and whilst I do it, I love it; I really do because I’ve learned to love the process of my costuming.

As a sexuality educator, working with young people I feel like a bit of a sham admitting to this. I’ve felt like even more of a crappy role model because all of my students are young women of color who receive many of the same messages that I battle with about beauty – and yet, they have been my biggest allies in this understanding of me, gender roles/expectations and on hair. And luckily that’s because I can tell them in appropriate drips and drops in conversation about the desire to grow out my hair, about family wants, cultural expectations… hair care and brushing the knots out of the darn thing!

Just as I am all of the above, I am also an Afghan woman happens to be a queer feminist.

For my parents, the short hair was received as a double whammy – rejecting femininity, heterosexuality and their version(s) normality. What was formerly out of sight and out of mind was now at the dinner table.

In the midst of my short hair, my mother gave me a magazine with a Rihanna on the cover. She had a bright, fiery red ’do. I didn’t question it and a day or so later when talking about my own hair she said to me, “well, Rihanna has long hair now. And then I realized that she thought or convinced herself that I wanted to be or emulate Rihanna?! I mean, I DO want to be Rihanna (funny though, this has a lot to do with my new Queer Theory #6), but that’s not why I cut my hair short.

When my dad first acknowledged my short hair it was weeks after I cut it short. At the dinner table he said to me, I hate to say it but you look like one of them.

He may have said which one he meant, but I don’t remember really.

And now, I have my long hair and it has gotten even longer. And I really love it. I don’t like the comments I get from men on the street.

I reminded of the first time my short hair got even shorter – like fuzzy/shaved short and I freaked out. I called my ex to yell at her for recommending the salon I went to. And I freaked out at myself because I remember walking frantically on the streets of the West Village looking for a street vendor to buy a hat because I was no longer pretty.

I have to remind myself I am not just a queer done one way; or a feminist through one lens; I am not my parents’ breed of Afghan Logari-style alone… I am a blended, complex.

And in my messy complexity, the truth is, I feel pretty.

Not just because of my look, of my hair, of my aesthetic. I think it’s an inner peace, light, noor that comes through. I feel content because pieces as much as the pieces begin to move apart, they also fit. 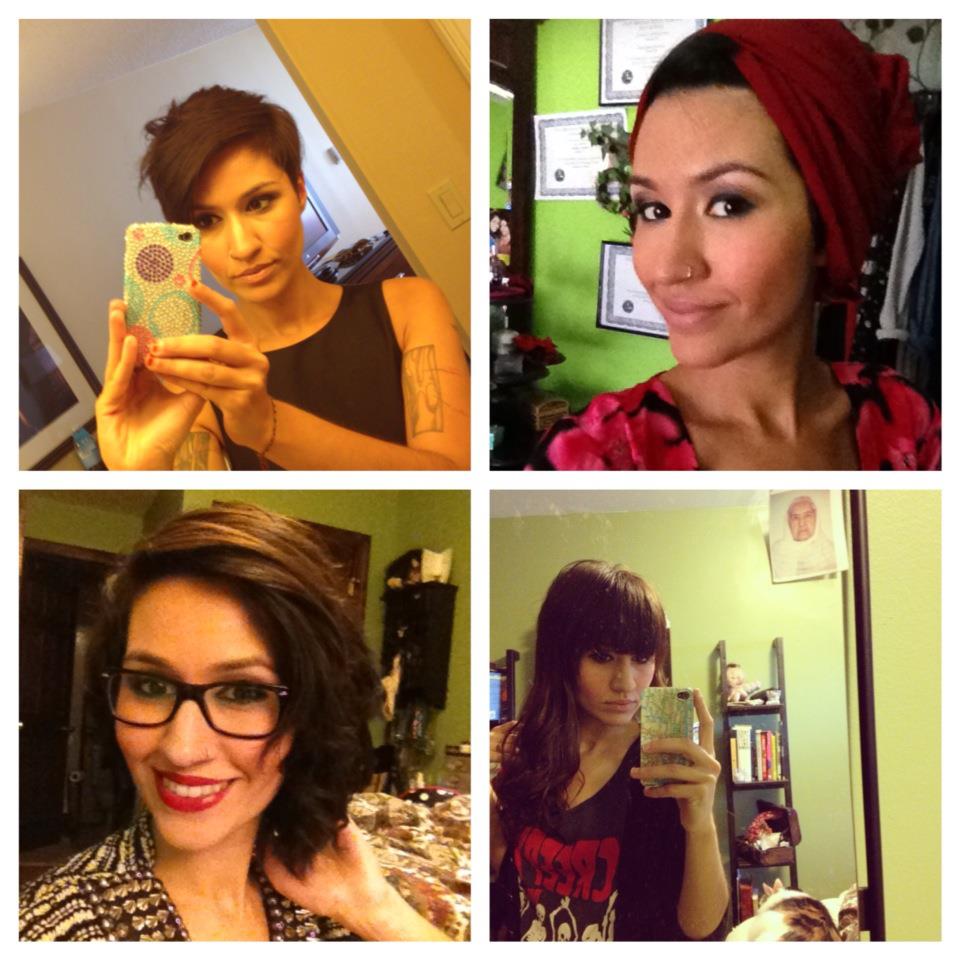