Coming Out Muslim: Radical Acts of Love is a storytelling performance featuring Wazina Zondon and Terna Tilley-Gyado. The show is most often accompanied by a talkback and/or one of a variety of social justice workshops we facilitate on issues ranging from Islamophobia and homophobia to Faith and Sexuality.

We are organizing our Fall & Winter 2019 – 2020 performances now! Please contact us if you are interested in bringing COM to your community.

Please enjoy the offering here, which are all in service of the possibility of each of us being as we are.

Join us for an Anniversary Performance on Friday, 12/6/19 at 7pm in Brooklyn, NY.

As lovers of Allah and humanity, we are committed to liberation and freedom for queer Muslims, and all who stand at the intersections of identities, to be the shining souls we are, our light unimpeded by anyone s prejudices, threats, “you can’t”s and “you shouldn’t”s. We are real. We are. 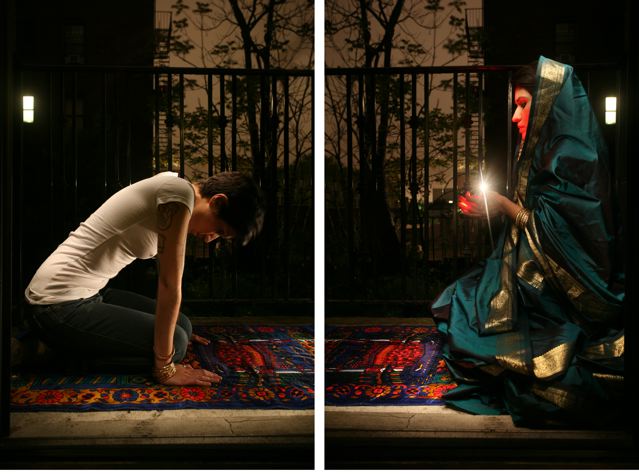 For me, being both has never been a source of internal conflict. I’ve never felt Islam asks me to be something other than what I am. If Allah is closer than my own jugular vein, is the creator of my heart–ya Khalaq! ya Bari! Ya Mussawir!–the source of its blood and beat, how could I despise myself?

Coming Out Muslim: Radical Acts of Love, captures stories and experiences of being at the intersections of Islam and queerness and its relationship to family, lovers, one’s sense of self and relationship with our faith. Terna and Wazina utilize traditional storytelling and conversation as the medium for exploring the broad range of their experiences as queer Muslims. The stories Coming Out Muslim tell range from tales about other people’s theories about where queerness comes from, the gifts of being queer and Muslim, the tension between one’s culture and religion, and love—romantic and spiritual. Coming Out Muslim is both funny and poignant.

Our (r)Evolution
In January of 2011, we co-facilitated a series of inquiry to action groups (ItAGs) through the New York Collective of Radical Educators (NYCoRE) on Islamophobia. Our intention was to provide a foundation of understanding about Islam and the varied experiences and diversity in the interpretation and “doing” of Islam. In our journey, we met Laura Marie Thompson who asked us to collaborate on a project celebrating the lives and experiences of queer Muslims at the 7th Street Gallery at Middle Collegiate Church. All three of us felt strongly about a visual gallery to make public and express the diversity in the faces of queer Muslims. Coming Out Muslim would be about making visible our often invisible identities.

Later in October 2011, under the guidance and support of Laura Marie, we decided to take our stories to the stage at WOW Cafe Theater in the East Village. We never anticipated that the show would have the impact that it did or that it would be received with open arms, providing it with the momentum keep performing and educating. Now, approaching our 8th birthday (2019) we have found ourselves blessed to continue to share by invitation – never hesitate to envision brining Coming Out Muslim to your community!

Copyright © 2019 coming out muslim | Supported by: iDev For A Cause